Devices such as variable frequency drives, servo drives, LED light drivers and other devices that rectify AC to DC can generate harmonic distortion. It is important to limit the distortion under a certain level in order to reduce effects on other equipment in a facility.

In power transmission, due to the fact that most loads are inductive, there is more reactive power resulting in extra current being supplied. This leads to power loss and high temperatures with additional cost to the operator. For this reason industries are charged extra if they have a low power factor.

In a sinusoidal wave it is important to understand when harmonics are generated. The electrical network provides a sinusoidal voltage and the load absorbs a certain current which depends on the impedance of the load itself.
If the response is linear, the relationship between voltage and current is constant. In a resistive load for example, the current wave shape will be identical to the shape of the voltage wave that is sinusoidal and therefore without distortion.

If the load response is not linear, the current waveform will not follow the voltage waveform but will depend on the ratio between voltage and current at each instant. This will therefore result in a non-sinusoidal waveform.
A typical example of a non-linear load is represented by  the input rectifier bridge built inside drives.

THD and TDD parameters are used to evaluate harmonic content.
THD or Total Harmonic Distortion is expressed as a percentage and is calculated according to the following formula:

TDD or Total Demand Distortion is the same as calculating the THD but instead of referring to the fundamental current, it refers to the current Ir which is the rated current of a full load.

The THD is measured by a percentage instant value and has no real indication of the amount of harmonic distortion without knowing the load current absorbed at that particular moment.

Power factor is defined as a ratio between real power and apparent power in the circuit. The measured value of power factor is the interval between -1 and 1. A power factor less than one indicates that the voltage and current waveforms are not in phase. A negative power factor occurs when the load generated power flows back to the source. Typical examples of low power factor are: 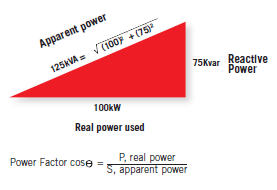 Problems Generated by Harmonics and Displacement Power Factor
Both harmonic distortion and displacement power cause the following problems in an installation:

Below are typical examples of a non- linear load with current THD % versus cost. 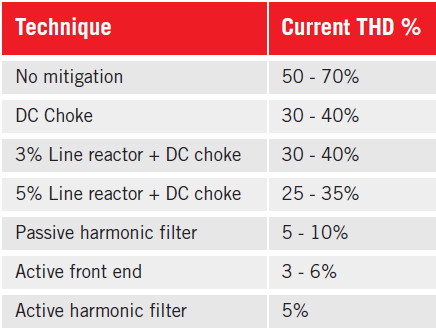 As an alternative, the active harmonic filter works in parallel and compensates current for single or multiple load applications operating under varied loads. They may be used for single applications or an entire facility.